This page covers some community events at which BRARC has exhibited many aspects of radio technology to public attendees.

Two young ladies look on as their coded messages are decoded by the computer.

On 29th April 2017, BRARC launched 2
simultaneous outreach programs; one at
the Baton Rouge Maker Expo, and the
other at the International Astronomy Day held at the Highland Road Park Observatory.

Paul Catrou, WA4MXT brought a KX1
transceiver, a 40 m 2 transistor rock-bound transmitter; both he built himself from kits. He used a dummy load and wires binding the transmitter to the input of transceiver as well as cabling to a laptop to encourage the public to send messages via CW to a laptop. 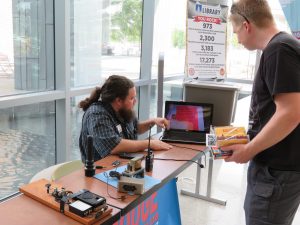 Dan shows off the maker roots of Ham
Radio when most operators had to build
their own rigs.

Dan Lott, KF5TQN showed off a hand built 40 m single tube transmitter made by a 16 year old Gerald Clouatre, AG5AY. Dan also showed videos made by Bob Heil, K9EID demonstrating the construction and testing of The Pine Board Project, a homemade tube AM transmitter; as well as inform the public about the early years of ham radio — when nearly every operator had to build their own. As the event wound to a close, a dozen people had expressed interest in Ham Radio & three took materials on licensing. 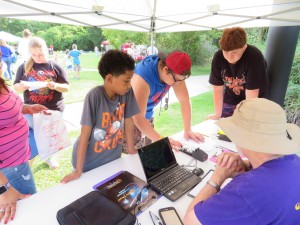 After packing up at the library, Dan joined Dana Brown, AD5VC, Jen Bordelon, K5NMT, and Jon Reise, WA9JBR at the observatory. Crowds quickly grew dense (dispersing briefly for the fire dancers) around the table as Dana demonstrated CW, and encouraged onlookers to send their names in Morse code with a practice oscillator. 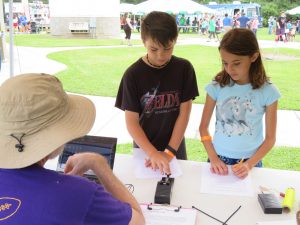 Dana handed out over 50 certificates for those who sent their name, and a dozen packets on learning Morse code by sound. A dozen individuals also took home information about ham radio, and how to get on the air. Jon and Jen made a few contacts as special event station N5B, but the bands were uncooperative for SSB. After 9 PM, the crowds began to disperse while Dana and Dan continued working by flashlight. 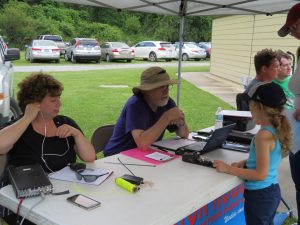 At 10 PM, Dana & Dan packed up the tent,
picked up the inverted V dipole and
cranked down the tri-bander Yagi on the
dipole.
Article by Dan Lott, KF5TQN
Photos by Jon Reise, WA9JBR 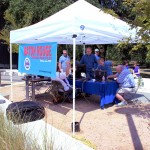 This year’s Baton Rouge Mini Maker Faire was held Saturday on the 8th of October at the East Baton Rouge Parish Main Library on Goodwood Blvd. The Library’s staff was kind enough to set us up with an outdoor site complete with tables, chairs, and more importantly, a tent.

Dan (KF5TQN), Thornton (KG5HLC), and Paul (WA4MXT) arrived early & began setting up, Dick (N5KIP) arrived with a homemade adjustable vertical antenna and a straight key code practice oscillator. Paul set up a Raspberry Pi Zero text to speech demo, Dan set up his laptop with a RTL-SDR to demonstrate software defined radio, and Dick & Thornton set up and tuned an HF transceiver on 20 meters. Daniel Smith (N5KHM) also arrived early and helped us set up before heading off for urgent business. 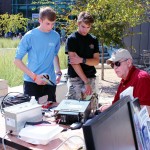 Once the show opened to the public, the club’s tent saw heavy traffic from the public, many questions were fielded, the code key got enough use to run the batteries flat, and the public was able to observe the Hurricane Net in operation as operators checked in from all over the east coast. 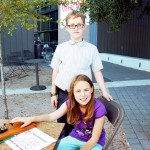 The show was a rousing success as a record number of people got involved enough to take materials home and many expressed interest in the licensing test happening in advance of the club’s monthly meeting on the 25th of October. Several persons with lapsed licenses expressed interest in getting back on the air regularly. Several club members recounted stories of their work during the recent Great Flood experienced by the Greater Baton Rouge Area this August, driving further interest in Amateur Radio. Over 40 kids learned to spell out their names in International Morse Code. 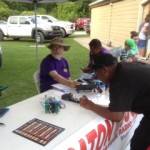 booth where students and their parents could send their name in Morse code. This activity was quite popular, with some youngsters returning two or three times. In addition, we had a HF station where one student assisted with a contact.. Brett helped a handful of youngsters engage in a conversation with Synomen KG5IRS, on the 146.79 repeater. 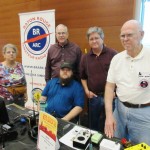 BRARC participated in the Red Stick Maker’s Expo held on Saturday April 30, 2016 at the Main EBRP Library. Dan (KF5TQN) led the club’s efforts with a demonstration of APRS and SDR. Buddy (N5BUD) showed off several nicely constructed QRP radios and pieces of test equipment he has built from kits as well as circuits of his own design. 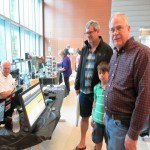 Stormy weather adversely impacted the expected turnout for the event, however, among those attending were several who lingered at the club’s table, expressed interest in learning more about amateur radio and possibly attending the ongoing technician class. 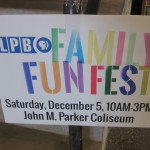 Members of BRARC participated at the LPB Family Fun Fest on Sat, 5 Dec 2015 at the LSU AgCenter on the LSU campus. Buddy, N5BUD setup a booth with numerous small DIY receivers, transmitters, and telegraph keys which caught the interest of many of the youngsters. He was assisted in the booth by Brook, N5DGK, Thornton, KG5HLC, and Jon, WA9JBR. Floor traffic was heavy at times and at least 50 young people successfully sent their name in Morse code, which entitled them to an award certificate. The exhibit was a great way to show young people that Morse code is still alive and well and that Amateur Radio is a great wireless hobby and means of communications. Later that evening, Buddy and Brook presented a Morse code demonstration for a group of scouts at the USS KIDD who were staying overnight on the ship. 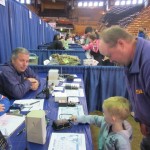 Buddy and Brook starting a youngster early on Morse code. 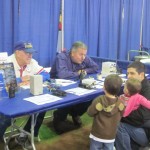 Thornton is talking up Ham Radio. 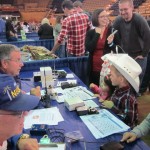 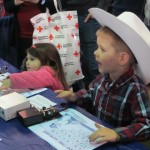 Members of BRARC participated in the Mini Maker Faire on September 26, 2015 at the East Baton Rouge Parish main library. Exhibits about amateur radio and our club were set up and presented by Dana (AD5VC), Ty (KA1TY), Buddy (N5BUD), Jim (N5IB) and Daniel (N5KHM).  Below are selected photos from the scene. It was good to see so many young folks and adults attracted to the many displayed devices that represent  various hands-on, do-it-yourself and historical aspects of amateur radio. Below are selected photos from the event, which included 70 diverse exhibits spread around the library’s interior and outdoor plaza. (Click on any thumbnail for an expanded view.) 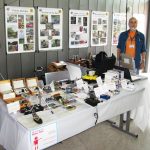 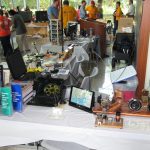 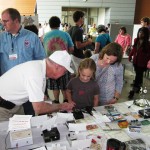 Buddy showing a young lady how to use a key for sending Morse Code. 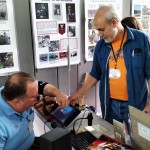 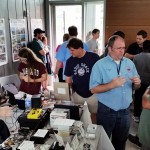 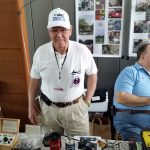 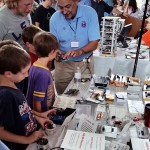 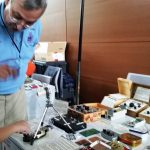 Another young student of Morse Code

Jim and Buddy interacting with visitors 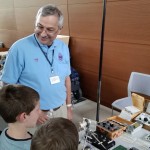 Another view of students learning about Morse Code and radio