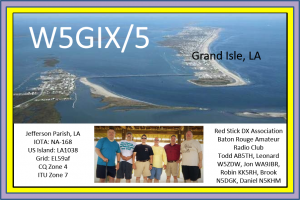 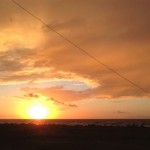 Sunrise on the Gulf

Six members of the Baton Rouge Amateur Radio Club traveled to Grand Isle, LA to activate Islands On The Air (IOTA) NA-168 as W5GIX. The DXpedition, as it is now called, ran on 14-16 Oct 2016 and is the 4th year that Grand Isle has been activated by BRARC. Only one other Ham lives on Grand Isle and he holds a Technician license.

IOTA is an amateur radio activity program designed to encourage contacts with islands world-wide. The oceans’ islands have been grouped into some 1200 “IOTA groups” with qualifying islands, in each. The objective, for the island chaser, is to make radio contact with at least one station in as many of these groups as possible and, for the DXpeditioner, to provide such island contacts. 21 separate certificates are available for island chasers, graded in difficulty.

The DXpedition was organized and led by Robin KK5RH, and included Brooke N5DGK, Todd AB5TH, Leonard W5ZDW, Daniel N5KHM and Jon WA9JBR. Leonard was the designated CW operator, while Robin was the designated cook and SSB operator. A house camp, looking out on the Gulf of Mexico acted as the base of operations, as it has for the past 4 years. 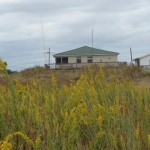 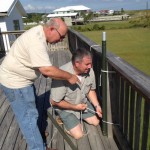 Robin and Brook securing the mast

The team setup the antennas and rigs Friday afternoon and made the first contact around 4 pm CT with W2HZ in Tucson, AZ. The operation ran Friday night and all day Saturday, through the evening. The station was disassembled Sunday morning, with the team arriving back in Baton Rouge in the early Sunday afternoon. 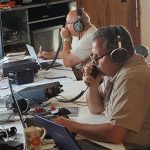 The station consisted of two rigs, a Kenwood TS-590 and a Yaesu FT-897, each running about 100 W with external band-pass filters. The team decided to simplify the antenna installation this year and erected 80 m and 40 m dipoles, along with an end-fed, all-band long wire, mounted as a sloper. The rigs were operated simultaneously, with the station being shut down during the night and during the LSU game. 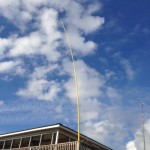 Hot stick and mast for antennas

A total of 212 contacts were in 40 states and 9 countries on SSB and CW. The primary bands of operation were 80, 40 and 20 meters. A little excitement ensued when Jon, WA9JBR was called by IZ8DFO in Italy at 5 pm on 40 m SSB. We were running 100 W and the dipole – don’t count wire antennas out! Pileups were frequent, but the constant noise level of S7 proved to be the challenge of the operation. The noise source could not be traced to anything in the house, but did decrease in intensity during a light rain. We decided it was radiated noise interference, probably from a bad pole mounted transformer or faulty pole mounted insulators. Many more contacts could have been made with a lower noise floor.

The weather was beautiful, with low 80s during the day and low 70s at night. The team enjoyed working the pileups and mixing some beach time in with the operation. Robin provided his customary cuisine – this year jambalaya for lunch and fried shrimp and red fish at night! The team is already talking about next year’s DXpedition. Hope to see you on that one! 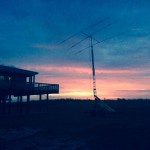 If you are interested in going to Grand Isle, Louisiana on a mini DX-pedition the dates are October 14-16th. A group from BRARC usually goes down every October to activate GI, LA for IOTA (Islands on the Air). We leave Friday morning after meeting for breakfast and return sometime the following Sunday. We do a little “radioing” and a little Cajun cooking, maybe boil a few fresh shrimp and pass a good time.

We need at least 8 members to sign up ahead of time to put this trip together. Cost of the trip is divided among participants. In the past I think it’s been about $125.00 +/- per person.

In the event we don’t have at least 8 sign up for the trip we will then make a decision whether to proceed with the trip or cancel. If we cancel, your full deposit will be returned to you. 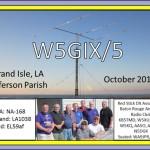 For twenty days during the month of January 2016 our friend and fellow amateur radio operator David Assaf (W5XU) spent his days and nights on the islands of South Sandwich and South Georgia which are both located in the Antarctic Region south of Argentina, We are proud of David and for this terrific opportunity that was given to him.

More information on this DX’Pedition can be found at:
http://www.intrepid-dx.com/vp8/
Also, see the December issue of QST (pages 90-91) for a nice article on the VP8 project.

David will be giving a presentation on this DX’Pedition at the DX Dinner at Ham-Com in Irving, Texas on Friday June 10th 2016.

The Red Stick DX Association, a part of the BRARC, was active from Grand Isle on October 23-25, 2015. There were five participants who braved the elements on NA-168 and made 220 contacts on 10-40 meters. This was the weekend of the CQ Worldwide DX contest, so the bands were very active with contesters.

A flash flood watch was issued Saturday evening, so it was decided to take down antennas at first light Sunday morning and evacuate the island before the only road accessing the island became impassable.

The three stations in use all performed well, and the operators had an enjoyable outing. 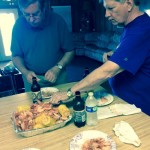 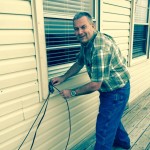 Our President, Brooke N5DGK, always willing to do the hard work. 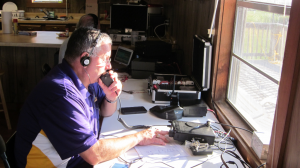 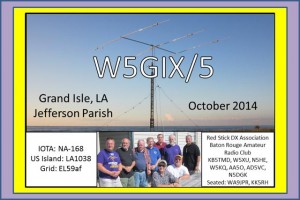 In late 1977 a group of local DXers got together to form a DX club. The mission of the club was to promote DX activities and help members advance in the DXCC standings. The club had a repeater and conducted a DX net one night each week. Each member submitted a list of what he needed and what he already had confirmed, along with his phone contact information. If any member spotted an entity that someone needed, he would call the member in need and give him information regarding the DX station and where he was. Additionally, DX spots were posted on the repeater. The RSDXA members worked together during the major DX contests and submitted club composite scores for those events. Unfortunately, the end of the current sunspot cycle, job transfers and deaths of key members resulted in the demise of the organization.

In June, 2011 after the DX Dinner at HamCom in Plano, TX, five Baton Rouge hams, K5DFD, K5DF, W5XU, AA5O, and W5AJD interested in DXing got together and decided to revive the Red Stick DX Association. They made a presentation to the BRARC Board to establish the Red Stick DX Association as a subsidiary of the BRARC. The Board approved this request and the revived Red Stick DX Association was formed. The initial activity of this new club was an expedition in January, 2012, to Grand Isle, LA to put Islands on the Air (IOTA) NA-168 on the air. Since this was a successful endeavor, the Association is planning additional activities during the coming year. The Association is planning an organizational meeting in early April, 2012, to develop a mission statement and to select a leadership organization. Details will be announced when they are firmed up. All hams interested in DXing are welcome to join and participate.